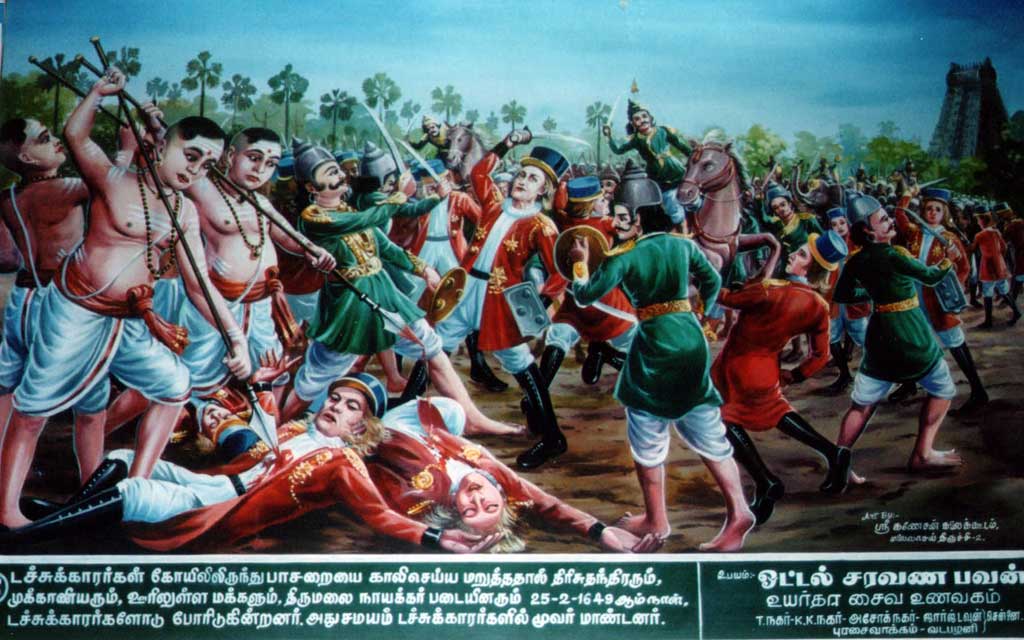 The illustrated story of Dutch marauders at Tiruchendur

1648-53: Dutch and Portuguese come to blows at Tiruchendur

A treaty with the Dutch was concluded in 1646 by terms of which they were allowed to build a fort at Kayal-pattanam. This brought them into conflict with the Portuguese. They seized a Dutch boat laden with goods and drove the Dutch out of their fort and destroyed it.

In 1648 the Dutch left Tiruchendur, taking with them all the temple icons, and demanding an enhanced ransom of 100,000 reals. They carried away the icons Shanmukhar and Siva Natarajar, thinking that they were made of gold.

The popular tradition goes that the Dutch attempt at melting the icons proved futile, and when the sea suddenly grew boisterous and rocked the ship violently, the Dutch threw the icons into the sea to save their lives.

No sooner did the Dutch heave the icons overboard than the sea turned calm as suddenly as it had turned violent. The Dutch were awestruck and marveled at this miracle.

The loss of the icon was duly communicated to Vadamalaiyappa Pillaiyyan, the local administrator of the Nayakkan ruler at Tirunelveli, and sorely felt for some years. A great devotee that he was, Pillaiyyan was deeply affected and knew not what to do. Hence he ordered for a similar icon to be made in panchaloha.

In 1653, as the duplicate one was ready, and was on its way to Tiruchendur to be installed, Vadamalaiappa had a dream.

Acting to the advice conveyed to him by the God, he put out to sea and followed the instructions. In the dream he had been informed that the icon would be found at the spot where a lime fruit would be found floating, and the place marked by the circling overhead of a kite, the bird of Vishnu.

Vadamalaiappa Pillai recovered the original icon exactly as foreseen in his dream. The people rejoice and return the icons to the Temple.

Vadamalaiappa Pillai reinstalled the original icon in the temple in the year 1653. The replacement icon was then consecrated in the shrine of Tiruppirantîsvarar alias Venku Patcha Kovil situated east of Palamcottah (known as Murugan Kurichi).

Vadamalaiappa Pillai was greatly struck by the Lord’s grace in giving him this great relief, in memory of which he erected a mantapa near Thoondikai Vinayakar Kovil at Tiruchendur in his name and endowed it largely for the performance of a Kattalai for Subrahmaniam on the seventh days of Masi and Avani festivals. An inscription at the mantapa relates the incidents referred to.