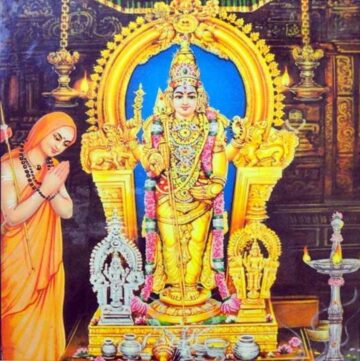 Murugan defies description.  The name ‘Murugan’ is derived from the root Tamil word murugu, a term associated with beauty, divinity and youth. He is known as ‘Su Brahmanya’, ‘Su’ signifying sacred and ‘Brahmanya’ signifying the eternal reality, Brahman. He is known by the knowledge he symbolizes; Jnana Pandita, by his qualities of love and compassion; Karunakara, by the spear he wields; Velayudha, by the peacock he travels; Mayilvahana, by the garland he wears; Kadamba, by the staff he holds, Dandayudhapani, by the place he resides like Vayaloora and by his six sacred faces, Shanmukha.

Murugan is the Lord most adored, most loved and most worshipped in South India.  In his Tiru Murugratrupadai, Nakkeerar described him as the God having six sacred abodes.  He appears as a youth, as knowledge absolute, as reflection of eternal reality, the Brahman, at Palani.  Murugan appears as Gurunatha, the enlightened Teacher at Swamimalai, as an embodiment of peace and serenity at Tanigaimalai and as a matured knowledgeable old man at Pazhamudir Colai. At Tiruchendur, Murugan appears a warrior and as a protector. In Bhagavad Gita, Lord Krishna says: “Among the warriors, I am Skanda”.

Among the various abodes of Muruga, Tiruchendur occupies a prime position for various reasons.  It is here, Lord Murugan waged battle against the evil forces represented by Soorapadman and his brothers, Singhamukhan and Tarakasuran and ensured the triumph of truth over evil. The location of Tiruchendur at the shore of the sea indicates that Murugan provides refuge at the shore for those who are eager to cross the ocean of material life.

At Tiruchendur, Lord Murugan appears as an embodiment of beauty, flanked by Valli and Tevayanai. Inside the temple there are lingams, symbolising the sun, moon and Atman. It is believed that Lord Murugan worshipped these lingams after the destruction of Sooran and created a pond called Skanda Pushkarini with His Vel. There is a strong belief that the devotee who worships Tiruchendur Murugan with devotion would be free from all the consequences of karma, come out of the adverse effect of indriyas (senses) and realize his natural, divine and real state.

Adi Sankara, the great sage who advocated the doctrine of Advaita, visited Tiruchendur temple, worshipped the Lord and received the ‘prasad’ wrapped in the leaf of panneer tree.  After the worship, he composed his famous Subramanya Bhujangam containing 33 stanzas. In his Tevaram, Appar Swamigal makes admirable reference to Senthil Andavar. Ilango Adigal describes Murugan as the Lord who ever radiates his grace from Tiruchendur.  Adarvana Veda describes him as the son of Agni.

When Kanda Sasti comes, the day Murugan achieved victory over evil forces; the whole Tiruchendur wears a festive look. The Kanda Sasti celebrations start the day after the new moon day, (Ammavasya) in the Tamil month of Aippasi (October-November) and culminate on the sixth day, the auspicious day of Sasti. The event is celebrated on a grand scale by enacting the destruction of Soorapadman by Murugan with his vel and a sea of devotees watch the spectacle with devotion.

Great sages like Nakkeerar and Kachiappa Sivacharyar have described the power, the qualities and Jnana of Murugan in magnificent terms.  Saint Arunagirinathar has weaved great garland of songs, Tiruppugazh, on the glory of Murugan.  In his song ‘Thandayani Vendayum’, he says:

“Oh! Muruga, as you came running towards your father, Siva, the ornaments like Thandai, Vendai, Kinkini and Sadanghai which you wore created a pleasant sound of music.  Just as you came round your father with love and reverence and embraced him, I too wish to come near you and marvel at your majesty, admire your face that shines brilliantly like a full moon, your glittering crown, your broad shoulder adorned by kadappa garland, your lotus-coloured hands, your ensign, your lance that destroyed Sooran, your twelve dazzling eyes and your Lotus Feet. Oh Lord, would you not come before me and give me the pleasure of seeing you to the delight of my eyes?”

“Oh Lord of Tiruchendur”, Arunagirinathar says in another song, “I want to keep Yama’s arrival date behind me, resist my mind from yielding to the charm of women, transcend the three states of Sattva, Tamo and Rajo guna, go beyond the transitory state of day and night, break away from the sorrows caused by senses (indriyas), sing songs hailing the glory of your Lotus Feet, derive the real knowledge that emanates from the Lord of Tiruchendur and get the inner vision that dawns from this knowledge. Oh Muruga, would I ever succeed in steadying my mind and reach a state where words and actions totally come to standstill and realize your presence within?  (Andhakan Varum Dinam)

E-mail your feedback to the author V.S. Krishnan at: vsk1940@gmaiol.com
See other articles by the author at his website: www.thiruppugazh.org